RSS Feed
← I Have a Secret …
Better Than Ice Cream → 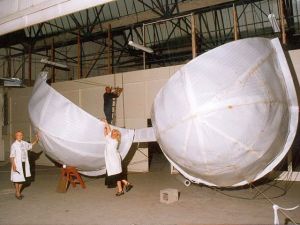 At 33 years old (can that really be right?), it’s become nearly impossible to remain blissfully ignorant of all the gory and incredible things a woman experiences during pregnancy. Still, I’ve been pretty successful at getting this far without knowing too much about it. The result is that each new development has been surprising and somewhat bewildering.

Such as, people tell you your boobs will get big. No one tells you they’ll be massive. And heavy. And wildly sore, all the time. I’ve now graduated into the scary bra category which — for a gal who’s long been kidding herself by wearing a too-big B-cup — is pretty bizarre. My new bras don’t come in fun colors or feature little bows at the center. Rather, today’s number features three rows of three clasps at the back and a nice wide band to help minimize back fat. Which it doesn’t.

I always felt it would be kind of cool to be more voluptuous, but now that my body is expanding in every direction, I’m not so sure. Sometimes I find that some brownie crumbs have saved themselves for later by lodging in my cleavage — that’s about the only benefit. Worst of all, I keep hearing the same thing over and over: “And they’ll only keep getting bigger!”

The unexpected result is that, like Jon Krasinski’s character in “Away We Go” (a must-see, by the way), I’ve started to stare inappropriately every time I see a pregnant woman. Right at her boobs.

Hmmm … hers are pretty big. Wonder what they were like before …?

It’s not good. Hopefully I’ll grow out this phase soon. In the meantime, if you catch me staring at your boobs, please forgive me.

Not sure which is bigger: bump or bust!

Posted in Pregnancy and tagged Body Image, Changes, Pregnancy Humor. Bookmark the permalink.
← I Have a Secret …
Better Than Ice Cream →